A child* at the age of 13 was taken from one part of India (before partition) to live in another part. Years later Pakistan and India parted and then eventually Pakistan and Bangladesh separated. Now she was living in Bangladesh, her third country. 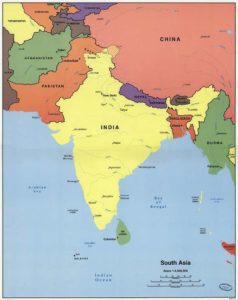 Bangladesh is to the east of India

She did not speak the local language and so she is what the Bangladeshis call a Bihari (an Urdu speaker) a group of people who are often persecuted since they have been deemed Pakistan sympathisers, especially the older generation. As a result, Biharis often live in shanty towns and may not be allowed to vote, lack working rights, and many cannot get a passport.

She was married off as a teenager and then gave birth to a child, which she later lost due to starvation by her in-laws. They were so abusive towards her that she contemplated taking her own life, all because she was a Bihari.

Her husband had left to seek his fortune in Dubai but eventually returned to collect her. However, she was deemed “too young” to be married and there was the issue of her nationality. He forged a passport and took her to the Gulf state of Dubai where she bore more children and resided. As the years went by, her husband left Dubai to visit his family in Bangladesh where he passed away. But she did not return to Bangladesh as she feared her in-laws and the persecution that seemed all too likely.

In Dubai she learnt how to drive a bus and became a female only driving instructor. But at 65 years old, she had to leave Dubai, as they only allow those of working age to obtain visas. She came to the UK to join her daughter who was married with a family. Sadly, her daughter only wanted her to work for her, cook, clean, and look after her children and when she was unable to do so, her daughter became abusive towards her.

She was rescued from her daughter’s home by the UK police who contacted the Home Office. She claimed asylum in the UK because she feared return to Bangladesh. The Home Office refused her, stating she could return to Bangladesh because she had worked in the past; they said she was resourceful and it did not matter that she could not speak Bengali, she must have learnt some in her time in Bangladesh all those years ago. Even if she was considered one of the Biharis, she was a lucky one as she had a passport. The Home Office said she could adapt.

By now she had reached the age of 75 years old and was living in England alone. She had no home, was not allowed to work or receive benefits and so was destitute. Hope Projects stepped in, housed, supported and represented her. Her case went up and down the courts. The first judge stated that 75 years old was not a “great age” and that she could find work. He failed to consider the fact she would be considered a Bihari and persecuted. So the case went to the Upper Tribunal who found he had erred in law and sent the case back for a new judge to consider. 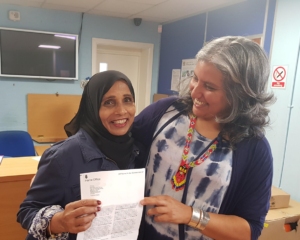 Finally this new judge found that she could not find work at 75 years old and that she would face persecution in Bangladesh, and so granted her refugee status in line with the 1951 UN Convention.

Her delight when she came into Hope Projects’ office in Birmingham after getting her papers was a special moment for us all. To be able to give people their life back again when they have been in total destitution is hugely uplifting.

She is now living safely and without fear.