A roof over their heads

Home/News/A roof over their heads

A roof over their heads 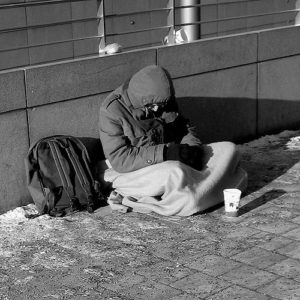 “A spokesman for Prime Minister Theresa May said:

‘Our position is that every person should have the security of a roof over their head, and tackling homelessness is a complex issue with no single solution.

But, we are determined to help the most vulnerable in our society. That’s why we are providing over £1 billion of funding to tackle homelessness and rough sleeping.’”

“Every person should have the security of a roof over their head.” Well, yes. Quite.

Here’s a thought. A genuinely helpful contribution towards achieving this clearly laudable policy objective. Stop making asylum seekers homeless and destitute immediately after an unsuccessful appeal. Keep them in a house until they either overturn the refusal in the courts or are removed. I mean, I know homelessness is ‘a complex issue’, but not turfing people onto the streets is a big step forward.

Last year Hope Projects supported 195 people in the West Midlands who were homeless and destitute. We either housed them, gave them regular cash for food and essentials or paid for them to go to Liverpool to make legal representations. This year it will be more. Some were street homeless. Others were sofa-surfing –generally in the homes of other asylum seekers. This is risky – it puts the host in breach of their license so if they are found, both they and their host will be evicted. They are generally out of the house before G4S staff start work and don’t return till after office hours have finished. An invidious situation for both people. Others are housed by charities such as Fatima House or Hope Into Action. Some rely on the generosity of hosts as part of Birch housing or Refugees at Home. None of these receive any money at all. None are able to work legally.

The Prime Minister believes every person should have the security of a roof over their head. The Home Office uses homelessness as a deliberate tool of policy. Perhaps they are simply unaware of the dissonance? It just needs a memo from Theresa to Amber. ‘Morning Amber – can you please stop making people homeless? Regards. T.’

Or Theresa May isn’t sincere in her stated desire that every person should have the security of a roof over their head.

Or (and my cynical self tends towards this explanation) those caught in the nightmarish labyrinth of the asylum system do not, in the Governments eyes, qualify as ‘people’